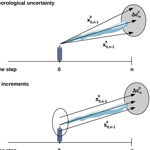 Abstract. Posterior fluxes obtained from inverse modelling are difficult to verify because there is no dense network of flux measurements available to evaluate estimates against. Here we present a new diagnostic to evaluate structures in posterior fluxes. First, we simulate the change in atmospheric CO2 fields between posterior and prior fluxes, referred to as the posterior atmospheric adjustments due to updated fluxes (PAAFs). Second, we calculate the uncertainty in atmospheric CO2 fields due solely to uncertainty in the meteorological fields, referred to as the posterior atmospheric adjustments due to imperfect meteorology (PAAMs). We argue that PAAF can only be considered robust if it exceeds PAAM, that is, the changes in atmospheric CO2 between the posterior and prior fluxes should at least exceed atmospheric CO2 changes arising from imperfect meteorology. This diagnostic is applied to two CO2 flux inversions: one which assimilates observations from the in situ CO2 network and the other which assimilates observations from the Greenhouse Gases Observing SATellite (GOSAT). On the global scale, PAAF in the troposphere reflects northern extratropical fluxes, whereas stratospheric adjustments primarily reflect tropical fluxes. In general, larger spatiotemporal variations in PAAF are obtained for the GOSAT inversion than for the in situ inversion. Zonal standard deviations of the PAAF exceed the PAAM through most of the year when GOSAT observations are used, but the minimum value is exceeded only in boreal summer when in situ observations are used. Zonal spatial structures in GOSAT-based PAAF exceed PAAM throughout the year in the tropics and through most of the year in the northern extratropics, suggesting GOSAT flux inversions can constrain zonal asymmetries in fluxes. However, we cannot discount the possibility that these structures are influenced by biases in GOSAT retrievals. Verification of such spatial structures will require a dense network of independent observations. Because PAAF depends on the choice of prior fluxes, the comparison with PAAM is system dependent and thus can be used to monitor a given assimilation system's behaviour.