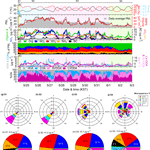 Influence of intense secondary aerosol formation and long-range transport on aerosol chemistry and properties in the Seoul Metropolitan Area during spring time: results from KORUS-AQ

Abstract. Non-refractory submicrometer particulate matter (NR-PM1) was measured in the Seoul Metropolitan Area (SMA), Korea, using an Aerodyne high-resolution time-of-flight aerosol mass spectrometer (HR-ToF-AMS) from 14 April to 15 June 2016, as a part of the Korea-US Air Quality Study (KORUS-AQ) campaign. This was the first highly time-resolved, real-time measurement study of springtime aerosol in SMA and the results reveal valuable insights into the sources and atmospheric processes that contribute to PM pollution in this region.

Our results indicate that air quality in SMA during KORUS-AQ was influenced strongly by secondary aerosol formation, with sulfate, nitrate, ammonium, SV-OOA, and LV-OOA together accounting for 76 % of the PM1 mass. In particular, the formation of LV-OOA and sulfate was mainly promoted by elevated ozone concentrations and photochemical reactions during daytime, whereas SV-OOA and nitrate formation was contributed by both nocturnal processing of VOC and nitrogen oxides, respectively, and daytime photochemical reactions. In addition, lower nighttime temperature promoted gas-to-particle partitioning of semivolatile species and formation of SV-OOA and nitrate. During a period of 4 days (from 20 to 23 May ), LV-OOA increased dramatically and accounted for up to 41 % of the PM1 mass. This intense LV-OOA formation event was associated with large enhancements of both anthropogenic and biogenic VOCs (e.g., isoprene and toluene), high concentration of Ox ( =  O3 + NO2), strong solar radiation, and stagnant conditions, suggesting that it was mainly driven by local photochemical formation. We have also investigated the formation and evolution mechanisms of severe haze episodes. Unlike the winter haze events which were mainly caused by intense local emissions coupled with stagnant meteorological conditions, the spring haze events appeared to be influenced by both regional and local factors. For example, there were episodes of long-range transport of plumes followed by calm meteorology conditions, which promoted the formation and accumulation of local secondary species, leading to high concentrations of PM. Overall, our results indicate that PM pollutants in urban Korea originate from complex emission sources and atmospheric processes and that the concentrations and composition of PM are controlled by various factors, including meteorological conditions, local anthropogenic emissions, and upwind sources.