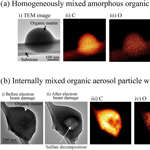 Aerosol composition and the contribution of SOA formation over Mediterranean forests

Abstract. As part of the Chemistry-Aerosol Mediterranean Experiment (ChArMEx), a series of aerosol and gas-phase measurements were deployed aboard the SAFIRE ATR42 research aircraft in summer 2014. The present study focuses on the four flights performed in late June early July over two forested regions in the south of France. We combine in situ observations and model simulations to aid in the understanding of secondary organic aerosol (SOA) formation over these forested areas in the Mediterranean and to highlight the role of different gas-phase precursors. The non-refractory particulate species measured by a compact aerosol time-of-flight mass spectrometer (cToF-AMS) were dominated by organics (60 to 72 %) followed by a combined contribution of 25 % by ammonia and sulfate aerosols. The contribution from nitrate and black carbon (BC) particles was less than 5 % of the total PM1 mass concentration. Measurements of non-refractory species from off-line transmission electron microscopy (TEM) showed that particles have different mixing states and that large fractions (35 %) of the measured particles were organic aerosol containing C, O, and S but without inclusions of crystalline sulfate particles. The organic aerosol measured using the cToF-AMS contained only evidence of oxidized organic aerosol (OOA), without a contribution of fresh primary organic aerosol. Positive matrix factorization (PMF) on the combined organic–inorganic matrices separated the oxidized organic aerosol into a more-oxidized organic aerosol (MOOA), and a less-oxidized organic aerosol (LOOA). The MOOA component is associated with inorganic species and had higher contributions of m∕z 44 than the LOOA factor. The LOOA factor is not associated with inorganic species and correlates well with biogenic volatile organic species measured with a proton-transfer-reaction mass spectrometer, such as isoprene and its oxidation products (methyl vinyl ketone, MVK; methacroleine, MACR; and isoprene hydroxyhydroperoxides, ISOPOOH). Despite a significantly high mixing ratio of isoprene (0.4 to 1.2 ppbV) and its oxidation products (0.2 and 0.8 ppbV), the contribution of specific signatures for isoprene epoxydiols SOA (IEPOX-SOA) within the aerosol organic mass spectrum (m∕z 53 and m∕z 82) were very weak, suggesting that the presence of isoprene-derived SOA was either too low to be detected by the cToF-AMS, or that SOA was not formed through IEPOX. This was corroborated through simulations performed with the Polyphemus model showing that although 60 to 80 % of SOA originated from biogenic precursors, only about 15 to 32 % was related to isoprene (non-IEPOX) SOA; the remainder was 10 % sesquiterpene SOA and 35 to 40 % monoterpene SOA. The model results show that despite the zone of sampling being far from industrial or urban sources, a total contribution of 20 to 34 % of the SOA was attributed to purely anthropogenic precursors (aromatics and intermediate or semi-volatile compounds).

The measurements obtained during this study allow us to evaluate how biogenic emissions contribute to increasing SOA concentrations over Mediterranean forested areas. Directly comparing these measurements with the Polyphemus model provides insight into the SOA formation pathways that are prevailing in these forested areas as well as processes that need to be implemented in future simulations.