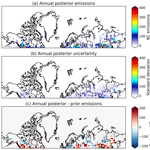 Abstract. This paper presents the results of BC inversions at high northern latitudes (> 50° N) for the 2013–2015 period. A sensitivity analysis was performed to select the best representative species for BC and the best a priori emission dataset. The same model ensemble was used to assess the uncertainty of the a posteriori emissions of BC due to scavenging and removal and due to the use of different a priori emission inventory. A posteriori concentrations of BC simulated over Arctic regions were compared with independent observations from flight and ship campaigns showing, in all cases, smaller bias, which in turn witnesses the success of the inversion. The annual a posteriori emissions of BC at latitudes above 50° N were estimated as 560±171 kt yr−1, significantly smaller than in ECLIPSEv5 (745 kt yr−1), which was used and the a priori information in the inversions of BC. The average relative uncertainty of the inversions was estimated to be 30 %.

A posteriori emissions of BC in North America are driven by anthropogenic sources, while biomass burning appeared to be less significant as it is also confirmed by satellite products. In northern Europe, a posteriori emissions were estimated to be half compared to the a priori ones, with the highest releases to be in megacities and due to biomass burning in eastern Europe. The largest emissions of BC in Siberia were calculated along the transect between Yekaterinsburg and Chelyabinsk. The optimised emissions of BC were high close to the gas flaring regions in Russia and in western Canada (Alberta), where numerous power and oil and gas production industries operate. Flaring emissions in Nenets–Komi oblast (Russia) were estimated to be much lower than in the a priori emissions, while in Khanty-Mansiysk (Russia) they remained the same after the inversions of BC. Increased emissions at the borders between Russia and Mongolia are probably due to biomass burning in villages along the Trans-Siberian Railway. The maximum BC emissions in high northern latitudes (> 50° N) were calculated for summer months due to biomass burning and they are controlled by seasonal variations in Europe and Asia, while North America showed a much smaller variability.