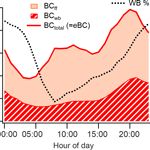 Abstract. The scope of this study was to estimate the contribution of fossil fuel and wood burning combustion to black carbon (BC) and carbon monoxide (CO) during wintertime, in Athens. For that purpose, in situ measurements of equivalent black carbon (eBC) and CO were simultaneously conducted in a suburban and an urban background monitoring site in Athens during the 3 months of winter 2014–2015. For the deconvolution of eBC into eBC emitted from fossil fuel (BCff) and wood burning (BCwb), a method based on the spectral dependency of the absorption of pure black carbon and brown carbon was used. Thereafter, BCwb and BCff estimated fractions were used along with measured CO concentrations in a multiple regression analysis, in order to quantify the contribution of each one of the combustion sources to the ambient CO levels. For a comparative analysis of the results, we additionally estimated the wood burning and fossil fuel contribution to CO, calculated on the basis of their CO ∕ NOx emission ratios. The results indicate that during wintertime BC and CO are mainly emitted by local sources within the Athens Metropolitan Area (AMA). Fossil fuel combustion, mainly from road traffic, is found to be the major contributor to both eBC in PM2.5 and CO ambient concentrations in AMA. However, wintertime wood burning makes a significant contribution to the observed eBC (of about 30 %) and CO concentrations (on average, 11 and 16 % of total CO in the suburban and urban background sites respectively). Both BC and CO from biomass burning (BCwb and COwb, respectively) present a clear diurnal pattern, with the highest concentrations during night-time, supporting the theory of local domestic heating being their main source.