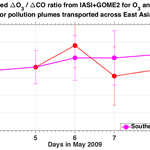 Abstract. We characterise a transboundary ozone pollution outbreak transported across East Asia in early May 2009 using new multispectral satellite observations of lowermost tropospheric ozone (located below 3 km altitude) in synergy with other satellite data and models. Our analysis is focused on the daily evolution of ozone pollution plumes initially formed over the North China Plain (NCP) and their transport pathways over northern China, Korea, Japan and the surrounding seas. A main aspect of the study is an estimation of the contribution of photochemical production of ozone during transport using the ratio of ozone to carbon monoxide enhancements with respect to background levels derived from satellite data and also from chemistry–transport models.

A key contribution of the analysis is the use of new satellite data offering unprecedented skills to observe the horizontal distribution of lowermost tropospheric ozone over East Asia on a daily basis, with a multispectral approach called IASI + GOME2 (combining Infrared Atmospheric Sounding Interferometer observations in the IR and Global Ozone Monitoring Experiment-2 measurements in the UV). These satellite observations are in good agreement with ozonesondes, with low mean biases (3 %), a precision of about 16 %, a correlation coefficient of 0.85 and practically the same standard deviation for a comparison based on 2 years of data from 46 launching stations distributed worldwide, during all seasons. A similar agreement is also found over East Asia. Moreover, IASI + GOME2 offers a unique capacity for observing the evolution of near-surface ozone during pollution outbreaks (with 5 % bias and 0.69 correlation), according to a comparison with surface in situ measurements during two major ozone events over several Japanese islands. Single-band ozone retrievals, such as those from IASI in the thermal infrared, do not capture such variability.

Using IASI + GOME2, we show that (i) ozone pollution plumes are transported by an anticyclonic circulation around the Yellow Sea from the NCP to northern China, Korea and Japan, collocated with carbon monoxide plumes; (ii) over northern China the plume splits into two pollution filaments with one mixing with freshly emitted pollutants; and (iii) ozone is produced every day of the event, accounting for an enhancement in concentration during transport across East Asia of up to  ∼ 84 % with respect to that produced over NCP. This estimation is done according to monotonically increasing values during 7 days of the ratio of ozone to carbon monoxide enhancements within the transported pollution plumes from about  ∼ 0.25 over the NCP to  ∼ 0.46 over the Pacific south of Japan.