Special issue: Atmospheric emissions from oil sands development and their... 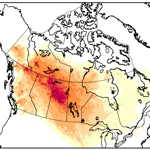 How important is biomass burning in Canada to mercury contamination?

Abstract. Wildfire frequency has increased in past four decades in Canada and is expected to increase in future as a result of climate change (Wotton et al., 2010). Mercury (Hg) emissions from biomass burning are known to be significant; however, the impact of biomass burning on air concentration and deposition fluxes in Canada has not been previously quantified. We use estimates of burned biomass from FINN (Fire INventory from NCAR) and vegetation-specific emission factors (EFs) of mercury to investigate the spatiotemporal variability of Hg emissions in Canada. We use Environment and Climate Change Canada's GEM-MACH-Hg (Global Environmental Multi-scale, Modelling Air quality and Chemistry model, mercury version) to quantify the impact of biomass burning in Canada on spatiotemporal variability of air concentrations and deposition fluxes of mercury in Canada. We use North American gaseous elemental mercury (GEM) observations (2010–2015), GEM-MACH-Hg, and an inversion technique to optimize the EFs for GEM for five vegetation types represented in North American fires to constrain the biomass burning impacts of mercury. The inversion results suggest that EFs representing more vegetation types – specifically peatland – are required. This is currently limited by the sparseness of measurements of Hg from biomass burning plumes. More measurements of Hg concentration in the air, specifically downwind of fires, would improve the inversions. We use three biomass burning Hg emissions scenarios in Canada to conduct three sets of model simulations for 2010–2015: two scenarios where Hg is emitted only as GEM using literature or optimized EFs and a third scenario where Hg is emitted as GEM using literature EFs and particle bound mercury (PBM) emitted using the average GEM∕PBM ratio from lab measurements. The three biomass burning emission scenarios represent a range of possible values for the impacts of Hg emissions from biomass burning in Canada on Hg concentration and deposition.