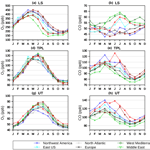 Climatology and long-term evolution of ozone and carbon monoxide in the upper troposphere–lower stratosphere (UTLS) at northern midlatitudes, as seen by IAGOS from 1995 to 2013

Abstract. In situ measurements in the upper troposphere–lower stratosphere (UTLS) have been performed in the framework of the European research infrastructure IAGOS (In-service Aircraft for a Global Observing System) for ozone since 1994 and for carbon monoxide (CO) since 2002. The flight tracks cover a wide range of longitudes in the northern extratropics, extending from the North American western coast (125° W) to the eastern Asian coast (135° E) and more recently over the northern Pacific Ocean. Several tropical regions are also sampled frequently, such as the Brazilian coast, central and southern Africa, southeastern Asia, and the western half of the Maritime Continent. As a result, a new set of climatologies for O3 (August 1994–December 2013) and CO (December 2001–December 2013) in the upper troposphere (UT), tropopause layer, and lower stratosphere (LS) are made available, including gridded horizontal distributions on a semi-global scale and seasonal cycles over eight well-sampled regions of interest in the northern extratropics. The seasonal cycles generally show a summertime maximum in O3 and a springtime maximum in CO in the UT, in contrast to the systematic springtime maximum in O3 and the quasi-absence of a seasonal cycle of CO in the LS. This study highlights some regional variabilities in the UT, notably (i) a west–east difference of O3 in boreal summer with up to 15 ppb more O3 over central Russia compared with northeast America, (ii) a systematic west–east gradient of CO from 60 to 140° E, especially noticeable in spring and summer with about 5 ppb by 10 degrees longitude, (iii) a broad spring/summer maximum of CO over northeast Asia, and (iv) a spring maximum of O3 over western North America. Thanks to almost 20 years of O3 and 12 years of CO measurements, the IAGOS database is a unique data set to derive trends in the UTLS at northern midlatitudes. Trends in O3 in the UT are positive and statistically significant in most regions, ranging from +0.25 to +0.45 ppb yr−1, characterized by the significant increase in the lowest values of the distribution. No significant trends of O3 are detected in the LS. Trends of CO in the UT, tropopause, and LS are almost all negative and statistically significant. The estimated slopes range from −1.37 to −0.59 ppb yr−1, with a nearly homogeneous decrease in the lowest values of the monthly distribution (5th percentile) contrasting with the high interregional variability in the decrease in the highest values (95th percentile).