Special issue: Atmospheric pollution in the Himalayan foothills: The SusKat-ABC... 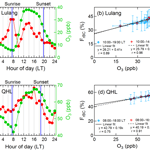 Abstract. Black carbon (BC) aerosol has important effects on the climate and hydrology of the Tibetan Plateau (TP). An intensive measurement campaign was conducted at Lulang (∼ 3300 m a.s.l. – above sea level), southeastern TP, from September to October 2015, to investigate the sources and physicochemical characteristics of refractory BC (rBC) aerosol. The average rBC mass concentration was 0.31 ± 0.55 µg m−3, which is higher than most prior results for BC on the TP. A clear diurnal cycle in rBC showed high values in the morning and low values in the afternoon. A bivariate polar plot showed that rBC loadings varied with wind speed and direction, which also reflected the dominant transport direction. The estimated net surface rBC transport intensity was +0.05 ± 0.29 µg s−1 m−2, indicating stronger transport from outside the TP compared with its interior. Cluster analysis and a concentration-weighted trajectory model connected emissions from north India to the high rBC loadings, but the effects of internal TP sources should not be overlooked. The average mass median diameter (MMD) of rBC was 160 ± 23 nm, with smaller MMDs on rainy days (145 nm) compared with non-rainy days (164 nm). The average number fraction of thickly coated rBC (FrBC) was 39 ± 8 %, and it increased with the O3 mixing ratios from 10:00 to 14:00 LT, indicating that photochemical oxidation played a role in forming rBC coatings. The average rBC absorption enhancement (Eabs) was estimated to be 1.9, suggesting that light absorption by coated rBC particles was greater than for uncoated ones. The Eabs was strongly positively correlated with the FrBC, indicating an amplification of light absorption for internally mixed rBC. For rBC cores  < 170 nm, Eabs was negatively correlated with MMD, but it was nearly constant for rBC cores  >  170 nm. Our study provides insight into the sources and evolution of rBC aerosol on the TP, and the results should be useful for improving models of the radiative effects of carbonaceous aerosols in this area.