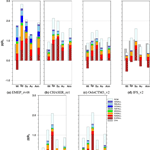 Abstract. This study is based on model results from TF HTAP (Task Force on Hemispheric Transport of Air Pollution) phase II, in which a set of source receptor model experiments have been defined, reducing global (and regional) anthropogenic emissions by 20 % in different source regions throughout the globe, with the main focus on the year 2010. All the participating models use the same set of anthropogenic emissions. Comparisons of model results to measurements are shown for selected European surface sites and for ozone sondes, but the main focus here is on the contributions to European ozone levels from different world regions, and how and why these contributions differ depending on the model. We investigate the origins by use of a novel stepwise approach, combining simple tracer calculations and calculations of CO and O3. To highlight the differences, we analyse the vertical transects of the midlatitude effects from the 20 % emission reductions.