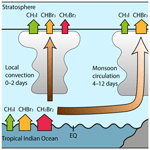 Abstract. Halogenated very short-lived substances (VSLSs) are naturally produced in the ocean and emitted to the atmosphere. When transported to the stratosphere, these compounds can have a significant influence on the ozone layer and climate. During a research cruise on RV Sonne in the subtropical and tropical west Indian Ocean in July and August 2014, we measured the VSLSs, methyl iodide (CH3I) and for the first time bromoform (CHBr3) and dibromomethane (CH2Br2), in surface seawater and the marine atmosphere to derive their emission strengths. Using the Lagrangian particle dispersion model FLEXPART with ERA-Interim meteorological fields, we calculated the direct contribution of observed VSLS emissions to the stratospheric halogen burden during the Asian summer monsoon. Furthermore, we compare the in situ calculations with the interannual variability of transport from a larger area of the west Indian Ocean surface to the stratosphere for July 2000–2015. We found that the west Indian Ocean is a strong source for CHBr3 (910 pmol m−2 h−1), very strong source for CH2Br2 (930 pmol m−2 h−1), and an average source for CH3I (460 pmol m−2 h−1). The atmospheric transport from the tropical west Indian Ocean surface to the stratosphere experiences two main pathways. On very short timescales, especially relevant for the shortest-lived compound CH3I (3.5 days lifetime), convection above the Indian Ocean lifts oceanic air masses and VSLSs towards the tropopause. On a longer timescale, the Asian summer monsoon circulation transports oceanic VSLSs towards India and the Bay of Bengal, where they are lifted with the monsoon convection and reach stratospheric levels in the southeastern part of the Asian monsoon anticyclone. This transport pathway is more important for the longer-lived brominated compounds (17 and 150 days lifetime for CHBr3 and CH2Br2). The entrainment of CHBr3 and CH3I from the west Indian Ocean to the stratosphere during the Asian summer monsoon is lower than from previous cruises in the tropical west Pacific Ocean during boreal autumn and early winter but higher than from the tropical Atlantic during boreal summer. In contrast, the projected CH2Br2 entrainment was very high because of the high emissions during the west Indian Ocean cruise. The 16-year July time series shows highest interannual variability for the shortest-lived CH3I and lowest for the longest-lived CH2Br2. During this time period, a small increase in VSLS entrainment from the west Indian Ocean through the Asian monsoon to the stratosphere is found. Overall, this study confirms that the subtropical and tropical west Indian Ocean is an important source region of halogenated VSLSs, especially CH2Br2, to the troposphere and stratosphere during the Asian summer monsoon.

The requested paper has a corresponding corrigendum published. Please read the corrigendum first before downloading the article.