Special issue: Regional transport and transformation of air pollution in... 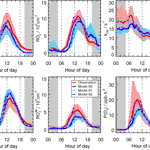 Radical chemistry at a rural site (Wangdu) in the North China Plain: observation and model calculations of OH, HO2 and RO2 radicals

Abstract. A comprehensive field campaign was carried out in summer 2014 in Wangdu, located in the North China Plain. A month of continuous OH, HO2 and RO2 measurements was achieved. Observations of radicals by the laser-induced fluorescence (LIF) technique revealed daily maximum concentrations between (5–15)  × 106 cm−3, (3–14)  × 108 cm−3 and (3–15)  × 108 cm−3 for OH, HO2 and RO2, respectively. Measured OH reactivities (inverse OH lifetime) were 10 to 20 s−1 during daytime. The chemical box model RACM 2, including the Leuven isoprene mechanism (LIM), was used to interpret the observed radical concentrations. As in previous field campaigns in China, modeled and measured OH concentrations agree for NO mixing ratios higher than 1 ppbv, but systematic discrepancies are observed in the afternoon for NO mixing ratios of less than 300 pptv (the model–measurement ratio is between 1.4 and 2 in this case). If additional OH recycling equivalent to 100 pptv NO is assumed, the model is capable of reproducing the observed OH, HO2 and RO2 concentrations for conditions of high volatile organic compound (VOC) and low NOx concentrations. For HO2, good agreement is found between modeled and observed concentrations during day and night. In the case of RO2, the agreement between model calculations and measurements is good in the late afternoon when NO concentrations are below 0.3 ppbv. A significant model underprediction of RO2 by a factor of 3 to 5 is found in the morning at NO concentrations higher than 1 ppbv, which can be explained by a missing RO2 source of 2 ppbv h−1. As a consequence, the model underpredicts the photochemical net ozone production by 20 ppbv per day, which is a significant portion of the daily integrated ozone production (110 ppbv) derived from the measured HO2 and RO2. The additional RO2 production from the photolysis of ClNO2 and missing reactivity can explain about 10 % and 20 % of the discrepancy, respectively. The underprediction of the photochemical ozone production at high NOx found in this study is consistent with the results from other field campaigns in urban environments, which underlines the need for better understanding of the peroxy radical chemistry for high NOx conditions.