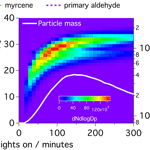 Abstract. Highly non-linear dynamical systems, such as those found in atmospheric chemistry, necessitate hierarchical approaches to both experiment and modelling in order to ultimately identify and achieve fundamental process-understanding in the full open system. Atmospheric simulation chambers comprise an intermediate in complexity, between a classical laboratory experiment and the full, ambient system. As such, they can generate large volumes of difficult-to-interpret data. Here we describe and implement a chemometric dimension reduction methodology for the deconvolution and interpretation of complex gas- and particle-phase composition spectra. The methodology comprises principal component analysis (PCA), hierarchical cluster analysis (HCA) and positive least-squares discriminant analysis (PLS-DA). These methods are, for the first time, applied to simultaneous gas- and particle-phase composition data obtained from a comprehensive series of environmental simulation chamber experiments focused on biogenic volatile organic compound (BVOC) photooxidation and associated secondary organic aerosol (SOA) formation. We primarily investigated the biogenic SOA precursors isoprene, α-pinene, limonene, myrcene, linalool and β-caryophyllene. The chemometric analysis is used to classify the oxidation systems and resultant SOA according to the controlling chemistry and the products formed. Results show that "model" biogenic oxidative systems can be successfully separated and classified according to their oxidation products. Furthermore, a holistic view of results obtained across both the gas- and particle-phases shows the different SOA formation chemistry, initiating in the gas-phase, proceeding to govern the differences between the various BVOC SOA compositions. The results obtained are used to describe the particle composition in the context of the oxidised gas-phase matrix. An extension of the technique, which incorporates into the statistical models data from anthropogenic (i.e. toluene) oxidation and "more realistic" plant mesocosm systems, demonstrates that such an ensemble of chemometric mapping has the potential to be used for the classification of more complex spectra of unknown origin. More specifically, the addition of mesocosm data from fig and birch tree experiments shows that isoprene and monoterpene emitting sources, respectively, can be mapped onto the statistical model structure and their positional vectors can provide insight into their biological sources and controlling oxidative chemistry. The potential to extend the methodology to the analysis of ambient air is discussed using results obtained from a zero-dimensional box model incorporating mechanistic data obtained from the Master Chemical Mechanism (MCMv3.2). Such an extension to analysing ambient air would prove a powerful asset in assisting with the identification of SOA sources and the elucidation of the underlying chemical mechanisms involved.