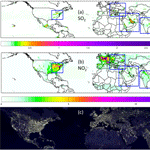 Abstract. The Ozone Monitoring Instrument (OMI) onboard NASA's Aura satellite has been providing global observations of the ozone layer and key atmospheric pollutant gases, such as nitrogen dioxide (NO2) and sulfur dioxide (SO2), since October 2004. The data products from the same instrument provide consistent spatial and temporal coverage and permit the study of anthropogenic and natural emissions on local-to-global scales. In this paper, we examine changes in SO2 and NO2 over some of the world's most polluted industrialized regions during the first decade of OMI observations. In terms of regional pollution changes, we see both upward and downward trends, sometimes in opposite directions for NO2 and SO2, for different study areas. The trends are, for the most part, associated with economic and/or technological changes in energy use, as well as regional regulatory policies. Over the eastern US, both NO2 and SO2 levels decreased dramatically from 2005 to 2015, by more than 40 and 80 %, respectively, as a result of both technological improvements and stricter regulations of emissions. OMI confirmed large reductions in SO2 over eastern Europe's largest coal-fired power plants after installation of flue gas desulfurization devices. The North China Plain has the world's most severe SO2 pollution, but a decreasing trend has been observed since 2011, with about a 50 % reduction in 2012–2015, due to an economic slowdown and government efforts to restrain emissions from the power and industrial sectors. In contrast, India's SO2 and NO2 levels from coal power plants and smelters are growing at a fast pace, increasing by more than 100 and 50 %, respectively, from 2005 to 2015. Several SO2 hot spots observed over the Persian Gulf are probably related to oil and gas operations and indicate a possible underestimation of emissions from these sources in bottom-up emission inventories. Overall, OMI observations have proved valuable in documenting rapid changes in air quality over different parts of the world during last decade. The baseline established during the first 11 years of OMI is indispensable for the interpretation of air quality measurements from current and future satellite atmospheric composition missions.